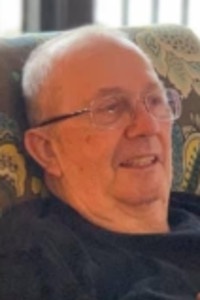 Mr. Buddy Lloyd Simmons, age 85, passed away Monday, August 9, 2021 at Douglasville Rehab facility. Buddy was born on July 5, 1936 in Norphlet, Arkansas. He was preceded in death by his father Gordon E. Simmons and his mother Naomi S. Simmons. He had 3 sisters who preceded him in death as well; Ardis Stephenson, Kathleen Simmons, and Betty Minetree. He is survived by his wife Gloria Delle Simmons of 65 years, one daughter Teri Delle Nixon Dempsey and her husband Kirk as well as one son Jeffrey Wynn Simmons and his wife Michele. He had 5 grandchildren: Eve Flowers (Philip Flowers), Sarah Blackwell (Arlin Blackwell), Jordan Kirk Nixon, Luke Simmons and Abi Simmons. He had 11 great-grandchildren; Kade Aucoin, Kendall Blackwell, David Flowers, Phelps Flowers, Everett Flowers, Micah Flowers, Lily Grace Simmons, Tyler Guy, Elliott Smith, Liam Andrews, and Lucy Andrews. Buddy attended LSU prior to working for Exxon. He told his grandchildren and great-grandchildren about his adventure of living in a dorm room under the LSU football stadium. Buddy remained an avid fan of the LSU Tigers even after moving away from Baton Rouge. He retired from the Exxon Refinery in Baton Rouge, Louisiana on August 1, 1991 as a Senior Staff Engineer in the Operations Support Department after 31 in a half years of service. He loved to fish and hunt recreationally. He also played semi-pro baseball for a short time. He attended First Pentecostal Church in Baton Rouge, Louisiana, for over 40 years, and was an active member. He is best remembered for leading the choir and worship, playing the saxophone as well as teaching Bible studies and Sunday School. Buddy would stand behind the pulpit as Gloria played the organ and direct the congregation to sing beloved hymnals from the songbook along with him. For almost 10 years, Buddy and Gloria drove an hour one way to assist their daughter and Gary Nixon with music at Christian Life Center in Plattenville, Louisiana. Buddy also taught midweek Bible Study and Sunday School while at CLC in Plattenville. For these 10 years, he was not known as Buddy, but was sweetly called "Pop" by the entire church family. He was loved and cherished by all. Buddy was a member of the Atlanta West Pentecostal Church in Lithia Springs, Georgia for the past 21 years. He continued to teach Bible Studies and loved attending Impact services in Jason and Bethany Jones' home for several years. Buddy attended many Atlanta Braves games at Turner Field and cheered his favorite baseball team on during the good and bad seasons. He was an amazing patriarch of his family, deeply loved and respected by all. Buddy was known as an incredibly peaceful man and very wise with decisions he made throughout his lifetime. Above all, he loved and served his Creator and Savior daily, never failing to give Him glory and count the many blessings from above. In accordance with Mr. Simmons' wishes, he will be cremated. The family will receive friends at Atlanta West Pentecostal Church, 2960 Skyview Drive, Lithia Springs, Georgia 30122 Thursday, August 19, 2021 from 11:00 AM until 12:00 Noon. Memorial Services will be conducted Thursday, August 19, 2021 at 12:00 Noon with Pastor Darrell Johns officiating. Messages of condolence may be sent to the family at www.jones-wynn.com. Jones-Wynn Funeral Home & Crematory of Douglasville is in charge of the arrangements. 770-942-2311
To order memorial trees or send flowers to the family in memory of Buddy Lloyd Simmons, please visit our flower store.