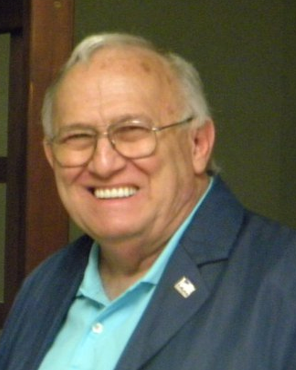 Charles Stanley King Jr. passed away on December 6, 2022, in Carrollton, Georgia at the age of 82. Known by many as Chuck and to his family in Ohio as Bud, a childhood name given to him by his mother.

Chuck served in the U.S. Air Force with distinction and honor. Growing up with a large family and serving in the military instilled a strong family culture and a strong work ethic.

Chuck worked for the Carroll County Board of Education maintenance department where he loved his job and enjoyed knowing his children and grandchildren’s teachers, administrators, and coaches – so he could always make sure they were behaving themselves. Chuck was well liked by his colleagues, teachers, and anyone who met him. He retired in 2001.

Chuck grew up with a stutter (or speech impediment) and overcame this by singing, he had a beautiful voice and he loved to sing along to the radio. This is one of his children and grandchildren’s fondest memories of him. He would spend hours playing records for his children’s entertainment. He loved to sing to the grandchildren and passed on his love of music to many of them. Especially two of his granddaughters, Virginia Barnes and Jacqueline Mobley.

Chuck was married to his second wife Rosie for 49 years, who predeceased him in 2019. Together they had 2 children.

His first wife Willie Mae Virginia, who died at the very young age of 27, leaving Chuck with 3 step-children and another young son he shared with Willie Mae.

He was a devoted husband and a loving father to his children. His only child with Willie Mae, Ronald Lee King, predeceased him in 2015.

Chuck is survived by five of his children, Mitchell (Susan) Jiles of Villa Rica, GA, Rebecca Jiles Hill of Carrollton, GA, Elizabeth (Jeff) Mobley of Villa Rica, GA, & Tommy (Jennifer) King of Rockmart, GA. He was also blessed with 18 grandchildren, with one of his beautiful granddaughters, Bridgett Nicole, who predeceased him in 1999. He also has a number of great-grandchildren and great-great grandchildren. He loved being Paw Paw King – this was one of his greatest joys in life and loved all of them with a full heart.  He also had many other children that called him “Daddy King” or “Paw Paw Chuck” which he loved as his own.

The family would like to thank Pine Knoll Nursing Home and Gentiva Hospice for taking great care of our beloved father and grandfather, where he was called the “sweetest and most kind man”.

To order memorial trees or send flowers to the family in memory of Charles Stanley King Jr., please visit our flower store.