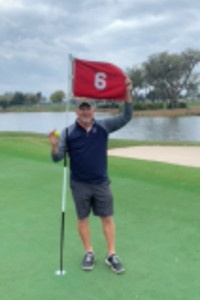 Charles Michael "Mike" Woodfin, 70, of Villa Rica, Georgia, passed away peacefully in his sleep on Wednesday, April 27, 2022. He was born on March 18, 1952, he is the son of the late Charles Everett Woodfin and the late Mary Jewel Helm Woodfin. Mike honorably served his country in the United States Air Force as a young man, then went on to work for Xerox and Hewlett-Packard as a Systems Analyst. He embraced his retirement and enjoyed traveling and golfing with his wife, Mary. He was actively involved in the lives of his children and grandchildren. You could frequently find him on the sidelines cheering on his six grandchildren at their basketball tournaments. He was well-loved by many people, and he delighted in making his friends and family laugh. He lived life to the fullest. In addition to his parents, Mike is preceded in death by his brother, James "Jimmy" Clyde Woodfin. He is survived by his wife, Mary Nicholson Woodfin; son, Buddy Woodfin (Paige) of Arkansas; daughter, Mary Woodfin Boggs (Andy) of Louisiana; sister, Cathy Corbin of Alabama; grandchildren, Evan Woodfin (Abigail); Judson Woodfin (Ericka); Anna Boggs, Avery Boggs, Drew Boggs, and Tate Boggs. The family will hold a Celebration of Life service for Mike on Saturday, May 14, 2022, 3:00-5:00. Since Mike was always intentional about reaching out to family and friends, in lieu of flowers, the family is requesting that you cherish time with your loved ones and tell them how much you love them. Messages of condolences may be sent to www.joneswynn.com. Jones-Wynn Funeral Home Inc., and Cremation Services of Villa Rica is in charge of the arrangements.
To order memorial trees or send flowers to the family in memory of Charles Michael Woodfin, please visit our flower store.