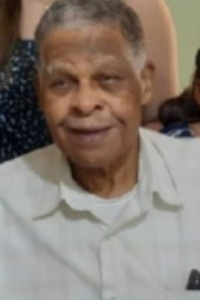 Today, we are here to celebrate the joyous life of Clifford Ralph Wallace. Clifford Ralph Wallace was born on November 6, 1933 in Colon, Panama to Daisy Elizabeth Burgess and Rafael Wallace. He worked at the Panama Canal Commission for 33 years where he worked as a machinery helper, then was promoted to boat tower, and lastly was promoted to chief engineer. He met his wife, Librada Amores, in November of 1963. They married on September 16, 1967. The two of them had 10 children and raised a beautiful family together. Clifford was a man of positivity and peace. No matter what life threw at him, he always took it with a grain of salt and looked at the bright side. He was a family man who held a special place in his heart for each member of his family. His family was everything to him and his children will forever remember that through these words that he spoke to them "You guys are all I have, you guys are my treasure, and I love you all equally". Clifford Wallace was a man of many titles. He was a support system for his mother, a caring father figure and brother to his siblings, a devoted companion and husband to his wife, a supportive and loving father to his children, and an all-around joy to be around. He is preceded in death by his parents and his son, Carlos Antonio Wallace Amores. The wonderful memories of Clifford will be cherished by his beautiful family composed of his wife, Mrs. Librada Amores-Wallace, his siblings: Mr. James McLaughin Burgess, Mrs. Simona McLaughin-Bramwell, Ms. Doris Elizabeth McLaughin, his children: Mr. Daniel Rodriguez Amores, Mr. Mack Amores, Mr. Ruyer Amores, Mr. Ulyses Eduardo Wallace Amores, Mrs. Obdulia Elizabeth Wallace-Mariscal, Mrs. Enriqueta Wallace- Rossi, Mrs. Yolanda Wallace-Medina, Mr. Octavio Wallace, Mr. David Orasmo Wallace Amores, his grandchildren: Ms. Alessandra, Ms. Gabrielis, Ms. Estefania, Ms. Katherine, Mr. Klein, Mr. Irvin, Mr. Ulysses Jr, Mr. Eduardo, Ms. Nicol, Mr. Clifford M., Ms. Gladys, Mr. Clifford Jr, Ms. Yuleyka, Daniel, David, Lineth, Abraham, Edgar, Octavio, Eduardo, Jose, Fidedigna, Cinthia and Annie, his son-in-laws: Mr. Daniel Ivan Mariscal, Mr. Fabio Rossi, Mr. Juan Felipe Medina Agosto, his daughter-in-laws: Mrs. Agapita Vazquez-Rodriguez, Mrs. Paula Morales-Amores, Mrs. Yuleika Cenedo-Amores, Mrs. Fulvia Murgas Macias-Wallace, and a host of other devoted friends, family, neighbors, and co-workers. I leave you all with one final thing, a verse from the bible. 1st Corinthians 13, verse 4-7 4 Love is patient and kind; love does not envy or boast; it is not arrogant 5 or rude. It does not insist on its own way; it is not irritable or resentful;[b] 6 it does not rejoice at wrongdoing, but rejoices with the truth. 7 Love bears all things, believes all things, hopes all things, and endures all things. Family will receive friends at Jones-Wynn Funeral Home on Friday, March 11, 2022 from 4:00 PM to 8:00 PM. Funeral Service will be conducted at 10:00 AM from St. John's Vianney Catholic Church in Lithia Springs. Messages of condolence may be sent to the family at www.jones-wynn.com. Jones-Wynn Funeral Home, Inc. and Cremation Services of Villa Rica is in charge of arrangements.
To order memorial trees or send flowers to the family in memory of Clifford Ralph Wallace, please visit our flower store.