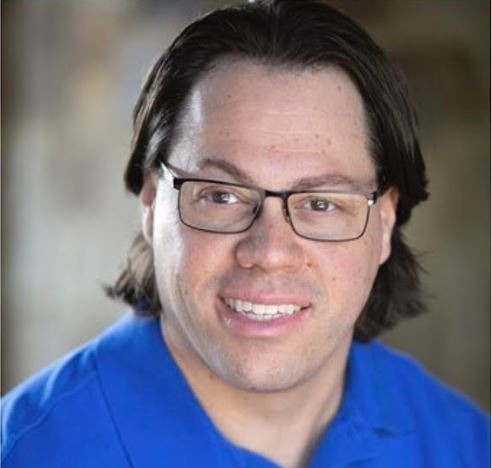 James enjoyed being around everybody; young, old, or in-between – your age did not matter to him. He had a great, dry sense of humor and a rich, deep, laugh. He was quite the team trivia player and loved surprises. He was also a gifted put-together and take-it-apart guy. James enjoyed quirky comedies, British television shows, and had quite the knack for easily understanding and imitating accents and dialects. He was always up for an adventure and would have traveled and explored places all over the world had he had the opportunity.

While a sophomore at Chapel Hill High School, James fell in love with acting when he first performed in Bye-Bye Birdie. He went on to act in four other productions there and graduated in 2002. It would be many years before he found his acting niche again. In 2018 James showed up to audition at the Carrollton Community Theater for what he thought was a “stand and pretend to talk” stage role in The Nutcracker. By the time his audition was over, Yurijs Safonovs had him dancing as a “party parent,” a role James would perform through 2021 and was looking forward to performing in 2022. Continuing at the Carrollton Cultural Arts Center, James went on to perform in Shrek – the Musical, La Boheme, Clue, and 9-5 – The Musical. At the time of his passing, he was looking forward to performing with the Carrollton Repertory Theatre in their upcoming production of RENT.

James loved his family deeply. If he could have called the shots, his two brothers, Adam and Charlie, would have moved back home with their brides as soon as their wedding ceremonies concluded, and they would have raised his three nephews and niece under the same roof. Growing up, his favorite family activity was hiking.

It is no coincidence that the first word James spoke was “light” because from birth, he would light up any room he entered. His smile was 1,000 watts. James’ keen memory was almost scary. He was the family historian, especially for dates. And he knew the location of every object at home. He could recall conversations and details of events with precision accuracy.

James was appointed to the Douglas County Cemetery Commission in December, 2006, and served as their photographer. He immensely enjoyed learning about, locating, and maintaining the 67 private cemeteries in Douglas County and appreciated their history.

James was quick to forgive and quick to ask forgiveness. Most of all, James was a kind, helpful, godly man who brought much joy and laughter to others – except that time he dumped an entire container of baby powder on his baby brother’s head – or that other time he dumped an entire box of instant mashed potatoes on his baby brother’s head and was stopped just before emptying a bottle of syrup there, too.

Celebration of Life Service will be Saturday, August 13, 2022 at Grace Presbyterian Church

The service will be live streamed and also available for viewing later on the Grace Presbyterian Church of Douglasville, GA, YouTube Channel.

In lieu of flowers, the family requests donations be made in James’ memory to a cause he championed:

Messages of condolences may be sent to the family at www.jones-wynn.com. Jones-Wynn Funeral Home of Douglasville is in charge of the arrangements. 770-942-2311.

To order memorial trees or send flowers to the family in memory of James Zefford Campbell III, please visit our flower store.