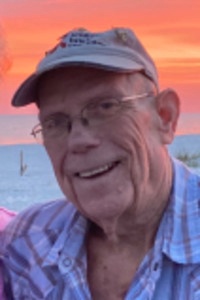 Mr. James "Jimmy" Richard Cline, age 79, of Lithia Springs, Georgia passed away on Sunday, October 24, 2021 with his wife of 59 years, his son and his baby girl by his side. He was born September 18, 1942 in Gallant, Alabama, the son of the late David Preston Cline and the late Sallie Mae Dillard Cline. Mr. Cline worked as a forklift driver for Kraft Foods. He never met a stranger and was affectionately known as the "Candy Man or Pepper Man". He enjoyed growing peppers, singing karaoke and working on cars. Mr. Cline was a member of Mt. Carmel Baptist Church. In addition to his parents, he was preceded in death by his brothers, David Preston "Buddy" Cline and Charles Edward Cline; and his sisters, Louise Cranford, Katherine Morgan and Nila Mae Minyard. Mr. Cline is survived by his wife, Mabel Cline of Lithia Springs; his son and daughter-in-law, Ricky and Michelle Cline of Lithia Springs; daughter and son-in-law, Juanita and Junior Taylor of Lithia Springs; two grandchildren, Heather and Jeffrey Blair of Villa Rica and Austen Taylor and Kayla Byrd of Lithia Springs; one great grandson, Jason David Blair; and many other family members and friends also survive. The family will receive friends at Jones-Wynn Funeral Home and Crematory of Douglasville, 2189 Midway Road, Douglasville, Georgia 30135 on Friday, October 29, 2021 from 6:00PM until 9:00PM and Saturday, October 30, 2021 from 11:00AM until 1:00PM. Funeral services will be conducted Saturday, October 30, 2021 at 1:00PM from the Chapel of Jones-Wynn, Douglasville with Pastor Pete Frames and Mr. Ricky Cline speaking and live-streamed on the Jones-Wynn Funeral Home & Crematory Facebook page. Interment will follow in Mozley Memorial Gardens in Lithia Springs, Georgia. At the request of the family, all those planning to attend any of the services for Mr. Cline are asked to please wear a mask. Messages of condolence may be sent to the family at www.jones-wynn.com. Jones-Wynn Funeral Home, Inc. and Crematory of Douglasville is in charge of the arrangements 770-942-2311.
To order memorial trees or send flowers to the family in memory of James "Jimmy" Richard Cline, please visit our flower store.