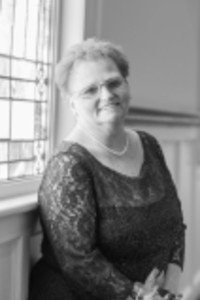 Mrs. Janet Lurene Jackson DeBorde, age 63 of Atlanta, Georgia passed away Thursday, March 4, 2021. She was born June 21, 1957 in Atlanta, Georgia, the daughter of the late Mr. William David Jackson and the late Mrs. Joan Rachel Lyons Jackson. Mrs. DeBorde loved her family and Christmas. Mrs. DeBorde is survived by her husband of 41 years, Mr. Michael Anthony DeBorde of Atlanta, Georgia; son and daughter-in-law, Matt and Amelia DeBorde; sisters and brother-in-law, Jonie and Jimmy Johnson of Snellville, Georgia, Diane Jackson of Canton, Georgia; brothers and sisters-in-laws, Fred and Lana Jackson of Griffin, Georgia, Eddie and Rheta Jackson of Florida, Brad and Polly Jackson of Conyers, Georgia, Danny and Dianne Jackson of Duluth, Georgia, David and Peggy Jackson of Douglasville, Georgia; twenty two nieces and nephews; twenty seven great nieces and nephews and one great great nephew also survive. According to Mrs. DeBorde's wishes, she was cremated. A Celebration of her Life will be held Thursday, March 11, 2021 at 2:00 PM from the Chapel of Jones-Wynn Funeral Home of Douglasville with Mr. Mike DeBorde officiating and providing the Eulogy along with his son, Matt DeBorde. The family will hold a Meet and Greet Thursday, March 11, 2021 from 1:00 PM until 2:00 PM from Jones-Wynn Funeral Home of Douglasville. The service will be livestreamed on the Jones-Wynn Funeral Home & Crematory Facebook Page. Messages of condolence may be sent to the family at www.jones-wynn.com. Jones-Wynn Funeral Home of Douglasville is in charge of the arrangements. 770-942-2311
To order memorial trees or send flowers to the family in memory of Janet Lurene Jackson DeBorde, please visit our flower store.