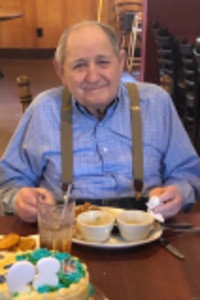 Mr. Jerrill Edward Garner, age 91, of Temple, Georgia, entered into rest on Thursday, July 29, 2021. He was born May 25, 1930, in Paulding County, Georgia, the son of the late Mr. Jimmy P. Garner and the late Mrs. Esther Louella Smith Garner. He married Mary Jo Ethel Yearty on December 5, 1953. Mr. Garner was a member of Utopia Baptist Church in Villa Rica, Georgia. He was a veteran of the United States Army, having proudly served in the Korean War from 1951 to 1953. Mr. Garner was a beloved father, grandpa, paw, great-grandpa, brother, uncle and friend. He loved his family and friends very much. In April of 1986, he gave his son Randy a gift of life by donating a kidney to him. During his lifetime, he was a farmer, a cattleman, and worked various public jobs. He retired from the City of Villa Rica. He loved his church family and was faithful in attendance as long as he could. He accepted Christ as his personal Savior in 1967. In addition to his parents, Mr. Garner was preceded in death by his loving wife of 53 years, Mary Jo Ethel Yearty Garner; his son, Randall Wayne Garner; his brothers, Ples Garner, James Garner and John Junior Garner; and his son-in-law, Don Coleman. He is survived by his two daughters and son-in-law, Sherrie and Howard Glidewell of Villa Rica and Sue Coleman of Carrollton; daughter-in-law, Treva Garner of Winston; sister, Jacquelyn "Aunt Jack" Ingram; brother, Curtis Garner; five grandchildren, Kristina Wright of Winston, Michael "Woody" and Julie Coleman of Carrollton, Gina Jo and Nathan Smith of Temple, Amanda Kay and David Marsden of Milton and Jacob Bruce Coleman of Clarkseville; 14 great-grandchildren, Violet Nash, Alex Wright, Miriam Wright, Claire Coleman, Cade Coleman, Kamden Coleman, Isabella Coleman, M.J. Coleman, Juliana Coleman, Noelle Smith, Andrew Marsden, Molly Marsden, Ryan Marsden, and Maisy Marsden; several nieces and nephews also survive. The family wishes to express their gratitude to his special caregivers, who provided such loving care during his final years. The family will receive friends at Jones-Wynn Funeral Home and Cremation Services of Villa Rica, Sunday, August 1, 2021 from 4:00PM until 5:00PM for senior friends only and then open for public visitation, from 5:00PM until 8:00PM. Funeral service will be conducted at Utopia Baptist Church in Villa Rica, Monday, August 2, 2021 at 2:00PM with Rev. Clay Pawley, Rev. Wendell Rush and Bro. Woody Coleman officiating. Musical selections will be rendered by Utopia Baptist Church, Linda Finnell and Claire Coleman. Serving as pallbearers will be Woody Coleman, Jacob Coleman, Nathan Smith, David Marsden, Danny Phillips and Curt Garner. Honorary pallbearers will be great-grandsons. Interment with military honors provided by the United States Army Honor Guard will follow in the Private Estates Garden at Meadowbrook Memory Gardens on Hickory Level Road in Villa Rica, Georgia. For the safety of all in attendance, the family is requesting that masks be worn and social distancing guidelines adhered to. Messages of condolence may be sent to the family at www.jones-wynn.com. Jones-Wynn Funeral Home, Inc. and Cremation Services of Villa Rica is in charge of the arrangements 770-459-3694.
To order memorial trees or send flowers to the family in memory of Jerrill Edward Garner, please visit our flower store.