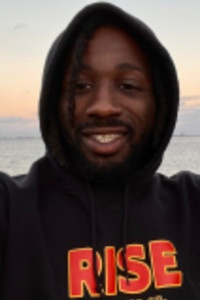 Mr. Julius Malik Holder, age 27 of Austell, Georgia transcended to Heaven Sunday, March 14, 2021. He was born December 11, 1993 in Toronto, Ontario, Canada to his loving parents Mr. Gregory Henderson Holder and Mrs. Heather Jacqueline Murray Cleveland. Highly motivated to achieve all personal goals he set for himself, Julius worked diligently to become a star athlete and an accomplished football player at The Lovett School. Later securing a football inspired academic scholarship to Stetson University, where during his freshmen year he was in the starting lineup and identified as a potential NFL prospect. He was featured by the local media as "Stetson's diamond in the rough." He was a leader, a team player, and an inspiration. Both inquisitive and intelligent, attaining a Bachelor of Arts degree in Spanish from Stetson University, DeLand, Florida, and a Ceremonia De Graduacion for completion of Spanish Studies from the University of Madrid, Spain. His quest for knowledge continued after college as he was always reading, researching, and seeking knowledge. Although he possessed wisdom beyond his years, he remained humble. Julius was "going places," literally always traveling, on the move, and pursuing his dreams. He worked energetically and steadfastly at multiple jobs, took on many projects, and did whatever it would take to pursue his dreams. Carving out a career in advertising and experiential marketing, he was rising as a Marketing Manager for GMR Global Marketing Agency. Julius was giving and laid back. He had a natural ability to share his time and energy with family, friends, coworkers, and loved ones, with an effortless appearance. He went above and beyond in all that he did, while maintaining a spirit of joy and generosity. Many of his friends described Julius's incredible gift of always being there for them at the right moment during their most difficult and vulnerable times and stated they would not be where they are today if it was not for him. He believed in taking care of others in their time of need, and encouraging people to succeed. Julius had fun wherever he went and with his infectious smile, he made sure those around him were smiling, uplifted, and laughing with him. He was always in his element and had a remarkable talent for bringing unique people and ideas together. Julius exemplified the qualities of his best self. With his heart always shining brightly, he possessed keen understanding and a vibrant and entrepreneurial spirit. Creative and inspiring, he was passionate about creating music, staying fit, and living his best life. Julius enjoyed photography and was even featured in a scene dancing in the film, "Project Almanac." He is preceded in death by a maternal grandmother, Mavis Murray; maternal grandfather, Oswald Murray; and maternal aunt, Ruby Eversley. Julius is survived by his soulmate, Cara "Mia" Claar-Reaser; mother and step-father, Heather Murray and Adam Cleveland; father and step-mother, Gregory and Charlene Holder; siblings, Trinity Cleveland, Jermaine Holder, Jonaé Holder; paternal grandparents, Greg and Gloria Holder, Sr., paternal grandmother, Gwen Holder; maternal grandmother, Nyola Cleveland; Godmother, Yasmin Thomas Dickey; paternal aunt, Kim Cleveland; maternal uncle, Glen Eversley; first cousins, Ajamu, Aisha, Jahi, and Kaiso Eversley, and a host of family and friends. Julius loved and served God while walking a spiritual path. Although we are devastated by our loss of his radiant and powerful presence, we can find solace knowing he is with our Divine Creator. The family will receive friends at Jones-Wynn Funeral Home of Douglasville, Thursday March 25, 2021 and Friday, March 26, 2021 from 3:00PM until 9:00PM. Funeral services will be conducted Saturday, March 27, 2021 at 3:00PM from Mt. Pisgah Baptist Church, 851 South Gordon Road SW, Austell Georgia 30168. Interment to follow in Meadowbrook Memory Gardens on Hickory Level Road in Villa Rica, Georgia. Messages of condolence may be sent to the family at www.jones-wynn.com. Jones-Wynn Funeral Home of Douglasville is in charge of the arrangements. 770-942-2311
To order memorial trees or send flowers to the family in memory of Julius Malik Holder, please visit our flower store.