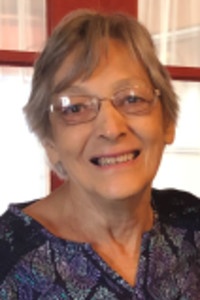 On May 25, 2021, Loretta Linville was at home, surrounded by her family, when she became absent in her body, and present with her Lord. Born on January 18, 1932, in Dayton, Ohio, daughter of Hazel and Hardin Johnson, she graduated from Wilbur Wright High School in 1950. In 1952, she was married to Bill Linville, until his death in 2015. They lived various places in the Dayton area, until moving to Windsor Locks, CT, and again to Lexington, KY, eventually living in Georgia from 1974 until her death, most of it spent living in Franklin, and the past 3 years in Villa Rica. Loretta was loved dearly by her family and had many friends, as she exuded the character of true Christianity, quietly and humbly living a life of faith, graciously serving behind the scenes with no desires for accolades or approval. She was dedicated to her church family, always there when needed to selflessly give of herself, and truly lived the command to esteem others better than herself, whether it was teaching Sunday School at Chapel Woods Presbyterian Church in Decatur, serving with the Bill Blass Prison Ministry, and for much of her later years, sharing the Gospel and teaching the Bible to the ladies in the Franklin Jail. At Franklin First Baptist Church, she led Bible studies for the women. She had a hunger for the Word of God, doing inductive study up until her last year of life. She was always taking a meal to someone, her prayer life was a comfort to many, and she sent hundreds of cards of encouragement in her lifetime, doing so up until she could no longer pick up a pen to write. Not even to mention all the times she was there for her family whenever needed, with no hesitation whatsoever. She finished her life as well as she lived it, without complaining, always with a thankful and a kind heart, in spite of her suffering. She will forever be our example of a Godly woman. Besides being predeceased by her husband, Bill, and her parents, she was also predeceased by her sister, Ruth Hild, brothers, George, Elbert, and Jack Johnson. She is survived by her beloved sister, Rosanna Lane, children Debby Morgan (Bill), Randy Linville (Laurie), Brenda Maserjian (Mike) and Cindy Freeman (Tim), 11 grandchildren and 7 great-grandchildren, and many nieces and nephews. We are so grateful for her nurses, Deana and Beverly and the rest of the staff at Fresenius Kidney Center in Villa Rica; Homestead Hospice, Cartersville, especially Pam and Holly; and for her caregivers Barbara, Becky, Diane, Susan and Victoria- we do not know what we would have done without them! The family will receive friends at Jones Wynn Funeral Home in Villa Rica, GA, on Thursday, May 27, from 4-7 pm. At her request, a private family graveside service will be held at Franklin Memorial Gardens the following day. Messages of condolence may be sent to the family at www.jones-wynn.com. Jones-Wynn Funeral Home, Inc. and Cremation Services of Villa Rica is in charge of the arrangements 770-459-3694.
To order memorial trees or send flowers to the family in memory of Loretta Mae Johnson Linville, please visit our flower store.