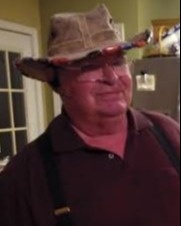 Hand delivered by a local florist

Mr. Louis M. Sadowsky, 74, of Douglasville, Georgia passed away Wednesday, August 17, 2022. He was born on November 15, 1947, the son of Mr. Milton Sadowsky and Mrs. Ellen Sadowsky. He loved woodworking, motorcycles, driving his Gold Wing and gardening. He always looked forward to being Santa Claus at Christmas time. He enjoyed time with family mostly his grandchildren and we cannot forget his beloved dog Snowy.

Mr. Sadowsky was preceded in death by his Parents and son-in-law Rodney James.

A memorial service will be conducted Sunday, August 21, 2022 from 2:00 PM until 4:00 PM at Jones-Wynn Funeral Home in Douglasville Georgia.

Messages of condolence to the family may be sent at www.jones-wynn.com.

Jones-Wynn Funeral Home & Crematory of Douglasville is in charge of arrangements. 770-942-2311

To order memorial trees or send flowers to the family in memory of Louis Marshall Sadowsky, please visit our flower store.