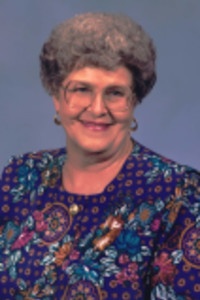 Mrs. Peggy Jo Daniell Furr, age 84, of Douglasville, Georgia, passed away Sunday, September 26, 2021. She was born February 24, 1937 in Douglasville, Georgia, the daughter of the late Mr. Robert Edward Daniell and the late Mrs. Gladys Louise Baggett Daniell. She worked as a secretary for the Parks and Recreation Department for the City of Douglasville. Mrs. Furr enjoyed baking for everyone, loved arts and crafts, loved reading and was an avid Atlanta Braves fan. She had a beautiful smile, a sweet heart and special love for her family. Mrs. Furr was Christian by faith and a member of Ephesus Baptist Church in Villa Rica. In addition to her parents, Mrs. Furr was preceded in death by her husband, Billy Joe Furr. She is survived by her daughter and son-in-law, Brenda and Ted Leak of Tarpon Springs, Florida; sons and daughters-in-law, Thomas and Lori Furr of Douglasville, Georgia and Ronnie and Lisa Furr of Villa Rica, Georgia; her sister and brother-in-law, Jane and Bobby Yancey of Douglasville, Georgia; six grandchildren, Micah (Samantha) Furr, Andrew Leak, Ashton (Zach) Arnold, Ethan Leak, Cameron Furr, and Corinne Furr; four great-grandchildren, Reese Arnold, Harris Arnold, Ava Furr and Tessa Furr; and numerous nieces and numerous nephews also survive. For those planning to attend the visitation and the services, the family asks that masks be worn. The family will receive friends at Jones-Wynn Funeral Home and Crematory of Douglasville, Monday, October 4, 2021 from 4:00PM until 8:00PM. Funeral services will be conducted Tuesday, October 5, 2021 at 11:00AM from the Chapel of Jones-Wynn Funeral Home, Douglasville with Dr. Billy Godwin officiating. Interment will follow in Mozley Memorial Gardens in Lithia Springs, Georgia. Messages of condolence may be sent to the family at www.jones-wynn.com. Jones-Wynn Funeral Home and Crematory of Douglasville is in charge of the arrangements. 770-942-2311
To order memorial trees or send flowers to the family in memory of Peggy Jo Daniell Furr, please visit our flower store.