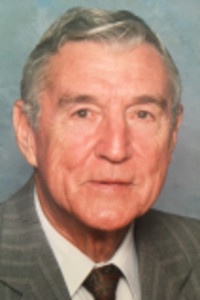 Richmond Gordon Tuggle, age 97, of Villa Rica, Georgia, formerly of Bessemer, Alabama and the youngest and last surviving child of the late Dulcina "Senie" Letha Vines Tuggle and the late Richmond Gordon Tuggle, Sr., left this earthly world surrounded by loved ones on Friday, September 3, 2021 in Villa Rica, Georgia. Richmond is survived by his wife of 71 years, Irma Ruth Clements Tuggle, his three daughters, Janice Chatham, Jean Grenier, and Carol Tuggle, his six grandchildren, and his four great grandsons. A graduate of the Auburn University College of Agriculture (War Eagle!), Richmond had abiding memories of the school where he met his future wife, Irma, and was the Captain of Scabbard and Blade, a military honor society. Richmond was a returning veteran from World War II when he attended Auburn. He had served in both the Pacific Theater and North Africa during his Marine tour of duty. He did not speak often about the war, only noting that he had seen great sacrifices of life for freedom and had spoken often with St. Peter, especially at Iwo Jima. After college, Richmond served in the Army and thereafter began a long career in pharmaceutical sales management. In 1969, he embarked upon a career change into the stock and bond industry. He started as a broker and built up a strong, loyal client base and retired as a Senior Vice President when he was 68. Richmond had many great joys in life in addition to his family. He played golf for decades in weekly games, in tournaments, and in casual rounds with his most successful trainee, Irma. After he retired, Richmond dived into cooking and had recipes published in community cookbooks. Richmond was an engaging story and joke teller and could also dazzle his audience by quoting Shakespeare's Seven Ages of Man and Poe's Eldorado. The family will receive friends at Jones-Wynn Funeral Home and Cremation Services of Villa Rica on Saturday, October 16, 2021 from 11:00AM until 12:00PM followed by a Celebration of Life gathering from the Chapel of Jones-Wynn Funeral Home at 12:00PM. The family is grateful for prayers. Messages of condolence may be sent to the family at www.jones-wynn.com. Jones-Wynn Funeral Home, Inc. and Cremation Services of Villa Rica is in charge of the arrangements 770-459-3694.
To order memorial trees or send flowers to the family in memory of Richmond Gordon Tuggle, Jr. , please visit our flower store.