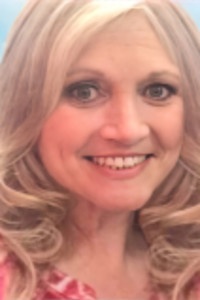 Tammy Ann Duhon, age 53 of Villa Rica, Georgia passed away Tuesday, August 3, 2021. She was born May 24, 1968 in Norwalk, Connecticut the daughter of the late Mr. William Frank Sollicito and the late Betty Louise Jones Sollicito. Tammy was devoted to her family, raising her children as a homemaker, and a devoted aunt. With her deep connection with her grandchildren, Granny T was perhaps her favorite role in her life. Tammy was the life of the party with a smile that lit up the room. Tammy was a Sunday school teacher and member of Beulah Baptist Church for almost 30 years. In addition to her parents, she is preceded in death by her late husband, James Christopher Landmon. Tammy is survived by her husband, Ray Duhon of Villa Rica, Georgia; daughter and son-in-law, Daisy and Jacob Campbell of Villa Rica, Georgia; sons and daughters-in-laws, Jason and Brooke Landmon of Woodland, Alabama, Anthony and Brittany Millsap of Cedartown, Georgia, and Joshua and Rachel Landmon of Baxley, Georgia, Joshua Duhon of Fayetteville, Georgia, Justin Duhon of New York City, New York; sisters and brothers-in-laws, Tina and Darrin Maddox of Woodland, Alabama, Ceceilia and Rick Wallace of Calhoun, Georgia; brothers and sisters-in-laws, William and Mandy Sollicito, Jr. of Pensacola, Florida, Thomas and Allison Sollicito of Calhoun, Georgia; nine grandchildren: Kamden and Emmett Millsap; Charlee, Carter, Aiden, and Owen Landmon, Gavin, Lachlyn, and Elowyn Campbell; numerous nieces and nephews also survive. The family will receive friends at Beulah Baptist Church in Douglasville Friday, August 6, 2021 from 1:00 PM until 3:00 PM. Funeral Services will be conducted Friday, August 6, 2021 at 3:00 PM from Beulah Baptist Church with Pastor Wayne Bray and Pastor Terry Pearman officiating. Messages of condolence may be sent to the family at www.jones-wynn.com. Jones-Wynn Funeral Home & Crematory of Douglasville is in charge of the arrangements. 770-942-2311
To order memorial trees or send flowers to the family in memory of Tammy Ann Duhon, please visit our flower store.