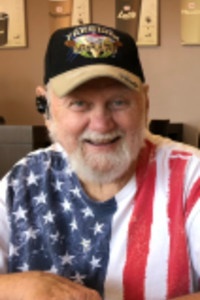 Mr. Terry Dwight Hindmon, age 71 of Lithia Springs, Georgia passed away Friday, May 14, 2021. He was born July 1, 1949 in Gadsden, Alabama the son of the late Mr. Joseph Albert Hindmon and the late Mrs. Betty Jackson Brown. Mr. Hindmon proudly served his country in the United States Navy. He was a longtime store manager at Cowan ACE Hardware in Lithia Springs. Mr. Hindmon was of the Christian faith. In addition to his parents, he is preceded in death by his wife, Vicki Whiteside Hindmon. Mr. Hindmon is survived by sons and daughters-in-laws, Todd and Stephanie Hindmon of Douglasville, Georgia, Stacy Hindmon of Calhoun, Georgia, Tracy and Deanna Hindmon of Temple, Georgia; father-in-law, Cecil Whiteside; sister and brother-in-law, Alisa and Keith Morningstar of Acworth, Georgia; brother-in-law and sister-in-law, Phil and Angie Whiteside; nine grandchildren, T.J., Brandon, Kalista, Holly, Memorie, Sara, Emily, Lily, and Ayden; many nieces and nephews also survive. The family will receive friends at Jones-Wynn Funeral Home of Douglasville Saturday, May 22, 2021 from 1:00 PM until 3:00 PM. Memorial Services will be conducted Saturday, May 22, 2021 at 3:00 PM from the Chapel of Jones-Wynn Funeral Home of Douglasville with Pastor Kevin Barton officiating. In lieu of flowers the family has asked that donations be made to either The Navy - Marine Corps Relief Society (nmcrs.org) or Elevate Christian Church (elevatecc.com). Messages of condolence may be sent to the family at www.jones-wynn.com. Jones-Wynn Funeral Home & Crematory of Douglasville is in charge of the arrangements. 770-942-2311
To order memorial trees or send flowers to the family in memory of Terry Dwight Hindmon, please visit our flower store.