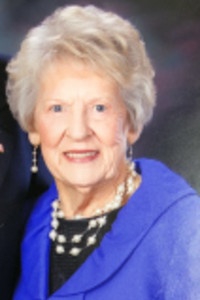 Mrs. Annette Brasher Tyson, 97, of Villa Rica, Georgia, passed away peacefully at her residence surrounded by her family, on Wednesday, June 22, 2022. Countless individuals were influenced by her kindness, humor and grace. She was an irreplaceable source of encouragement and positivity. She was born on July 26, 1924, in Carrollton, Georgia. She is the daughter of the late John Herbert Brasher and the late Blanche Jordan Brasher. Mrs. Tyson was a homemaker, who adored her family and community. They remain benefactors of her fierce love and desire to generously serve those around her. She was admired by many who encountered her and were touched by her authentic love. Her contributions and individual impacts will be felt for generations to come. She was a faithful member of the First Baptist Church of Villa Rica, Georgia for many years. She had a heart for missions; at home and foreign. Mrs. Tyson graduated from Villa Rica High School, where she met and married the love of her life, Henry Doris Tyson, Sr. She lived and worked in Atlanta, while he honorably served in the European Theatre during World War II. When he returned from the war, they purchased a beautiful farm on Highway 61, south of Villa Rica, where they raised their five children and extended hospitality to many within the community. She attended the Massey Business College extension program in Carrollton and became the bookkeeper for her husband's construction company, T & H Builders. She had a special love for the fine arts and performing arts. Her involvement and full engagement in her children's education was a vital part of her life. She was a volunteer extraordinaire and was eager to work collaboratively with others to provide optimal experiences for all students within the community. Her passion for education extended into the lives of not only her immediate children, but also her grandchildren and great grandchildren. She was an excellent seamstress for clothing and theatrical costumes. She loved baking and gifting others with her famous pound cake. Mrs. Tyson's multifaceted traits also included being a sketch artist, gardener, arborist and bird watcher. In addition to her parents, she is preceded in death by her beloved husband of seventy-six years, Henry Doris Tyson, Sr., in 2018; sons-in-law Lee T. Brown and Philip M. "Mat" Miller, Jr., three brothers, one sister, and her great grandson Conner Marshall Johnson. She is survived by her children, Henry and Brenda Gail Tyson of Villa Rica, Marcella Tyson Brown Correa of Villa Rica, Elaine Miller of Villa Rica, Marshall and Julia Tyson of Cleveland, Georgia, Janie and Mike Redding of Villa Rica; thirteen grandchildren, twenty two great-grandchildren, one great, great grandchild; several nieces and nephews also survive. The family will receive friends in the Villa Room at First Baptist Church of Villa Rica, on Sunday, June 26, 2022 from 2:00 PM until 3:00 PM, followed by a Worship and Remembrance Service held in the Sanctuary on Sunday, June, 26, 2022 at 3:00 PM with Henry Tyson, Jeff Powell and Kevin Williams officiating. Entombment will follow in the Tyson Mausoleum at Powell Chapel Cemetery in the Flat Rock Community. Grandsons Sonny Brown, Sonny Miller, Jason Miller, Michael Miller, Tyson Redding, and John Redding will serve as pallbearers; granddaughters Aimee Liner, Summer Restrepo, Sunday Pate, Ann Marie Lingerfelt, Natalie Johnson, Helena Kennedy and Abigail Perez will serve as honorary pallbearers. In lieu of flowers, the family requests that contributions be made to Tanner Medical Foundation, Memo: In Memory of Annette Tyson. Mail to: Tanner Medical Foundation, P. O. Box 695, Carrollton, GA 30112. Contributions will support Tanner Villa Rica Facilities. In addition, contributions may be made to St. Jude Children's Hospital, Memorial Giving, 501 St. Jude Place, Memphis, TN 38105. Messages of condolence may be sent to www.jones-wynn.com Jones-Wynn Funeral Home and Cremation Services of Villa Rica is in charge of the arrangements. 770-459-3694.
To order memorial trees or send flowers to the family in memory of Wilma Annette Brasher Tyson, please visit our flower store.